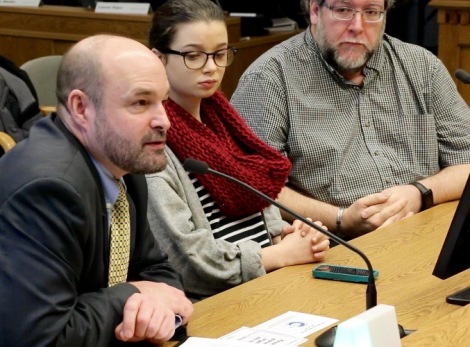 (L-R) Student media attorney Mike Hiestand, Kylie Charney-Harrington, a student journalist with The Blazer, the student newspaper at  Timberline High School in Lacey, Wash., and Mountlake High School student media adviser Vince DeMiero were among those to testify before a Washington State Senate Committee Jan. 21 in support of a bill that would protect the free press rights of  the state’s high school and college student journalists. [Photo by Dan Hiestand]

A Washington State Senate committee voted Tuesday to approve a bill that would give students at both public high schools and colleges in the state the right to exercise freedom of speech and of the press in school-sponsored media.

Senate Bill 6233 now moves forward, where its sponsor, Republican Sen. Joe Fain, who is also Senate Majority Floor Leader, hopes it will be scheduled for a vote in the full Senate.

The bill has not yet been introduced in the House.

“We’ve got a ways to go, but our fingers are crossed,” Hiestand said. “We’re delighted that the bill has attracted support on both sides of the aisle.” Earlier attempts, he noted, fell to partisan politics.

“Instilling free press principles in our next generation of journalists is not a red vs. blue issue,” Hiestand said. “It’s about as purple as you get!”

Washington is one of at least four states to recently introduce student free press legislation. More information can be found at New Voices USA, a network of state-by-state campaigns to pass anti-censorship legislation that will grant extra protections to student journalists.