What a time it is, with so many students saying,  “We can do better!” And, like through history, kids are taking action to make that happen.

In December, after the St. Louis grand jury’s decided not to indict the officer who killed Michael Brown, I marched in Washington DC with thousands of kids and adults to say,  “Black Lives Matter!”

The day before, I was with 8th graders at DC’s National Cathedral School.  Some planned to march the next day, and most had armbands for their causes: the environment, climate change, stopping violence, animal rights,  “equality” and more….

Earlier in the month, I visited the Academy West HS in Flint, MI, where kids were speaking up about a lot of things.  One student is speaking up “against home foreclosures,” saying that there would be a hearing about his own home later in the month.  He said that because his mom lost her job, their house was being foreclosed. 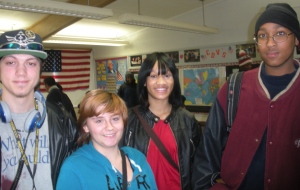 Later, I skyped with lively 5th graders at Northport middle school in New York.  Thanks for the great letters, kids!

The First Amendment, by skype!

In November I was thankful for students at Neshaminy HS who are standing up for their rights and the rights of Native Americans….

…Students like the the staff of The Playwickian at Neshaminy HS, who voted not to use the “R” word (Redskins) in their paper.  And, I met students from Lower Merion HS, who wrote an editorial in  “The Merionite,” in support. Both schools are outside Philadelphia.

The Neshaminy students and their advisor, Tara Huber,  had just won the Courage in Journalism award at the National Journalism Education Association (JEA) conference in Washington DC.  Despite bullying from some community members (including a death threat), and punishment by the administration, the Playwickian stands by their decision not to use the “R” word, and has enjoyed nationwide support.   They said that their action was in support Native Americans, not against their school.

The cake quotes the “Tinker” ruling

Thanks to Rutgers Professor Jill Friedman for setting it all up.  Her lucky law students take part in the “Marshall Brennan Constitutional Literacy Program”  and bring the Constitution to life for Camden high school students.  I was at the law school with them, as well as First Amendment champion Tom Eveslage, who gave a lesson on how to teach students’ rights (see curriculum at tinkertour.org, under “teachers.”)

In Little Rock, Arkansas,  I talked with amazing social studies teachers at the Arkansas Council of the Social Studies workshop, like Robin Morris, at Gravette Middle School, whose students I later skyped with.  Fun!

Thanks for your letters,  Gravette MS!

In Little Rock, how incredible to be where the”Little Rock 9″ stood up for their rights in 1957 by integrating Central High School.   I often tell students the story of those brave kids who risked their lives. Now, the National Park Service keeps the story alive as well, with a fine museum.

I’ll keep their story alive as well, as well as lots more in the coming year.  Stay tuned!