Yesterday, at the Dirkson Senate Office Building,  I met a group of middle students from Cesar Chavez middle school  wearing “Statehood” buttons.  When I asked them why, 12 year old Sterling, said “We need a voice.”  It seems they’re not happy that over 650,000 people in DC, including their families, are not allowed to have voting representatives or Senators in Congress. 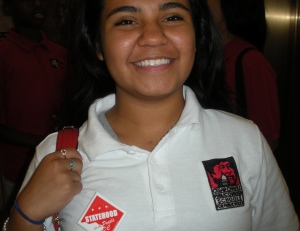 Ninth grader, Glenda, spoke up about other issues as well, including the situation with teenage immigrant children.  She said, “They should be able to come here to be with their families.”

The students have a newspaper, the Eagle, which some high school students at Wilson High School helped start as part of a creative idea they had called “The Paper Project.”