Cameras were rolling throughout our trip to California this week, and we definitely felt the love!

Our first stop was at Whitney High School in Rocklin on Tuesday, where we were welcomed warmly…

…and met some amazing young people! 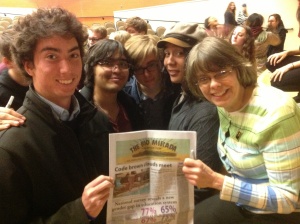 WCTV19 live streamed our talk, and the student journalists of the Whitney Update posted this fantastic Storify about our visit:

On Wednesday, we visited Monta Vista High School in Cupertino…

…and met some more amazing (and generous!) students…

…And you can check out that video here!

On Thursday, we met some awesome students at Convent of the Sacred Heart High School in San Francisco, including national award winning political cartoonist Rachel Fung…

…And Alice Jones, who photographed our stop.

(We’ll have some of her photos up soon!)

In the meantime, a video from Thursday’s stop at CSHHS can be viewed here!

On Friday, we were so pleased to speak alongside Karen Korematsu at The Harker School in San Jose. We first met Ms. Korematsu at the National Council for the Social Studies Conference in St. Louis, and in her we found a kindred spirit — someone who works to facilitate cross-cultural understanding and defend human rights! 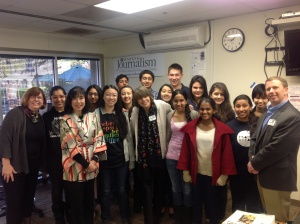 Ms. Korematsu was inspired by her father, Fred Korematsu, who spoke out against Japanese internment during WWII and was the defendant in the famous case  Korematsu v. United States.

Though he was originally convicted of violating military orders, that conviction was overturned when new evidence was found in the 80’s, and in 1998, he became the recipient of the Presidential Medal of Freedom. In her presentation at The Harker School, Ms. Korematsu said her father told her simply, “I did what was right.”

More of Fred Korematsu’s story can be found here, and you can see a video from Friday’s stop at The Harker School here!

Huge thanks to everyone out in California who showed us so much love and hospitality!