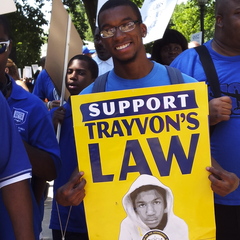 Today, on the the anniversary of Trayvon’s death, I’m thinking about all of the young people who are standing up and speaking up about the injustice and violence that black kids deal with. As a nurse, I took care of so many who were shot, attacked, traumatized. I held guaze to the chests of kids with holes in their chests, tried to soothe a boy with an eye that would never see again, took care of kids were paralyzed, or would never think with all of their brain again. So, today, I’m thinking of them, and cheering on the kids who are speaking up for Trayvon’s law, and who are speaking up against their schools closing, and so much more. Here’s to the First Amendment, and for kids who speak up!

For those interested, the NAACP has a good summary of Trayvon’s law.