A week of events in the Des Moines Public Schools is planned for December 14th to 18th to commemorate the 50th anniversary of events leading to the landmark Supreme Court ruling in Tinker v Des Moines Independent Community School District in 1969.

Two of the plaintiffs, Mary Beth and John Tinker, as well as their attorney, Dan Johnston, will tell the story behind the historic case, and discuss current student speech issues.  They will be joined by siblings Hope and Paul Tinker, who wore black armbands to their 5th and 2nd grade classes and will speak with fifth graders at both schools at their old Des Moines elementary schools, Madison and Cattell.

Bruce Clark, who helped to plan the original armband actions at Roosevelt High School and was also suspended there for wearing a black armband, will discuss how the black armband action was planned, and how it was censored by the Des Moines Public Schools administrators, leading to the Supreme Court challenge. Mr. Clark currently serves as Iowa State President of the American Postal Workers Union.

Throughout the week, student voices will be featured.  Kenna Bell, the student editor of the Roosevelt Roundup said that she is excited to meet the “Tinker” plaintiffs and celebrate the anniversary. “Some youth are unaware of the extent of their individual powers and freedoms. By raising awareness and promoting youth activism, there could be very positive outcomes for society as a whole,” she said.

Sulaimann Muhammad, a Roosevelt student who will speak on a panel December 15th as part of the anniversary events, said “some of my peers don’t believe their voices matter…I believe that no matter how old someone is, everyone has a voice.”
Events in Des Moines will be held at Roosevelt High School, North High School, Lincoln High School, Harding Middle School, and five elementary schools including Oak Park, Madison, Findley, Moulton, and Cattell.

On December 16 and 17, 1965, five students in Des Moines were suspended for wearing black armbands to school to mourn the dead of the Vietnam War and to support a Christmas truce called for by Senator Robert Kennedy.

The American Civil Liberties Union of Iowa challenged the studentsʼ suspensions in court, where they eventually won in 1969. In the famous ruling, which affirmed studentsʼ First Amendment rights, the Supreme Court said that neither teachers or students “shed their constitutional rights to freedom of speech or expression at the schoolhouse gate.”
According to Lexus Nexus, the case has been cited thousands of times in student speech cases, including those involving social media.

Mary Beth, who is a Registered Nurse, travels the country on a “Tinker Tour,”  telling her story as well as those of youth through history and today who have spoken up to make a difference.  She has recently travelled over 25,000 miles to over 100 schools across the country encouraging students to know- and use- their rights.

“I am thrilled to return to Des Moines and my old middle school for the 50th anniversary”, she said. “In eighth grade, I was suspended for wearing a black armband for peace.  This time, I’ll have a warm welcome, and that’s a good lesson for students- that you can change history.  I can’t wait to hear how the students in Des Moines are changing history today!”
When Mary Beth visited Harding two years ago on her “Tinker Tour,” she was given an honorary locker that she filled with constitutions, armbands and student newspapers from across the country.  This time, she’ll add a few more.

1stTeddyTalkPressRelease gives details of the public event to be held at Roosevelt High School in Des Moines on the evening of Tuesday, December 15 at 7 p.m.   The event is free and open to the public.

Sponsors of the Tinker programs are the Des Moines Public Schools, the School Administrators of Iowa, the Roosevelt  High  School  Foundation  and  Alumni  Association, the American Civil Liberties Union of Iowa, and the Student Press Law Center.

For more information, contact Mary Beth Tinker at marybethtinker@gmail or 202-534-7921. 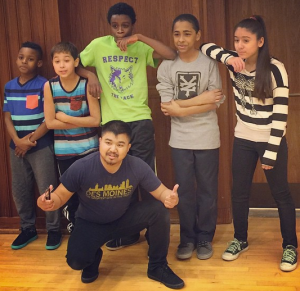 Warm Harding welcome in 2013- thanks, everybody!