It was a great week in Ohio,  with no shortage of controversy!

First stop:  Sept. 20: Law & Leadership Institute at Moritz Law School in Columbus, live-streamed to Akron, Cincinnati and Cleveland, for 400 high school students participating in a four-year curriculum on the law.  Whew! Students told me they’re speaking up for girls’ rights, peace, the environment, gay marriage, lowering the voting age to 16, and the environment. Fracking is also big- and controversial– in Ohio, and students were interested in the upcoming climate rally to be held in NY the next day. 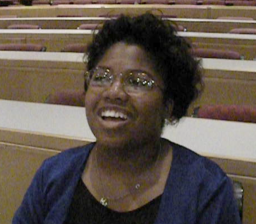 Tomara, 11th gr, Stivers School for the Arts, Dayton: “Women should have the same rights as men. Through the Girl Scouts, I’m a role model for younger girls, showing them that it’s alright to be who you are.”

Also, a senior from Dayton wearing a hijab told me, “I’m Palestinian and I speak against prejudice and genocide in Palestine.” Jalen, a senior at Columbus Afrocentric Early College, told me about his school, and that he may want to be a lawyer.

The Ohio ACLU, a sponsor, updated me on Ohio’s early voting controversy and how young people would be affected.

Next stop: the Ohio Center for Law-Related Education (OCLRE) conference for teachers.  Thanks, social studies teachers, for keeping democracy alive.  Some said they’ve been teaching the Tinker case for 40 years. Wow!

They also told me how their students use First Amendment rights, like kids at Lake HS who started an area-wide group called JUNO to stand up minority rights, or kids in Dayton, KY who had a petition over cleaning up the beer cans in the park, or kids at Gahana Midle School, who had a boycott over hair in their lunch. Now, there’s a cause worth fighting for!

Social studies teachers have their own controversies, too, with “No child left behind,” the rights of teachers being challenged, and history curriculum under attack in Texas, Colorado and elsewhere (is Ohio next?)

Thanks, social studies teachers, for all you do!

One of the teachers sent me a link about Reynoldsburg teachers, on strike for smaller class sizes, and the way standardized tests are used to evaluate teachers. I noticed that some students were out supporting the teachers,  so I stopped on my way to Athens to interview a few.  Here’s Connor, who I talked with on Wed., 9/24…..

Connor, 5th gr, “I came out to support my teachers.”

Off to ATHENS for Sept. 25 & 26, where students at U Ohio are getting pretty good at handling controversy.   Megan Mergen, president of the Student Senate,  dumped fake blood on her head to protest the Israeli killings in Gaza. For that, she got death threats and calls for her resignation. But most students I talked with spoke in favor of her First Amendment rights, though some said she shouldn’t have referred to her Student Senate position. She apparently agreed, apologizing publicly for that.

Later, four students were arrested for disrupting the Student Senate to protest Megan’s protest.  Through it all,  the student newspaper, “The  Post” didn’t shy away, but covered events fairly, including plenty of space for student opinions.  No doubt, their award-winning Society of Professional Journalists, named the leading chapter in the nation recently, and Dean Stewart’s leadership at Scripps School of Journalism had something to do with it!

“Those Who LIsten Will Know What’s New”
Katlin, journalism student & president of SPJ chapter, at Scripps School of Journalism

In case that wasn’t enough controversy,  the student legal group, Students Defending Students, were told this fall that their promotional shirt, “We’ll Get You Off For Free”  was censored.  A law suit is pending, aided by the Foundation for Individual Rights in Education, challenging what they claim to be U Ohio’s overly-broad student conduct code.

What a place, with an amazing outdoor mural telling the history of the town.  Andrew,  who teaches history, gave us a tour.  It was a good morning with students, and a great afternoon with community members, college students and high school students who came in to learn about students’ rights, and tell how they’re using those rights.

Thanks, “best friends” Deanna and Tashana for making my time special.  Like so many students I meet, they’re standing up for women and girls’ rights (starting with their own) while they raise their kids and finish their degrees.

So, here’s to everyone in Ohio who is keeping democracy alive by living it.  It was great to be with you again!